Manhattan Apartment by Richard Meier is Transformed for a Young Family

“A San Francisco family with a traditional 1920s house in Presidio Heights wanted something zippier for their New York pied-à-terre. Something more contemporary and bohemian; an apartment that was open, with lots of glass and a slightly edgy feel.” Retaining the rawness of the apartment’s big concrete pillars, Mindel softened its industrial tone by adding a plaster ceiling that he perforated with strips of recessed lighting, inspired by the checkered stripes of Piet Mondrian’s traffic-giddy painting Broadway Boogie Woogie. (For parties, LED lighting can be programmed to pulsate in different colors.) To define the living room, the architect designed a quietly patterned gray carpet with invisible seams to encircle the cylindrical columns. “It looks like the columns sit on the carpet, so we could move the living room further back because the columns aren’t in the way,” he says.

The room’s soft palette of grays defers to the omnipresent river, as do the low furnishings, such as the armless Atollo sofa by Paola Lenti. “You almost feel like it isn’t furniture, it’s shrubbery,” Mindel jokes. More subtly, the architect’s interior design fools the eye into thinking that the trapezoidal space is in fact rectangular by slightly shifting the centerlines of the living room seating areas. (The irregular shape of the building was the result of the intersection of the river, which is on a diagonal, with the urban grid.) In the most awkward corner, where a small terrace cuts into the floor space, he created a circular rug that appears to overlap the main carpet and was sewn into place on-site. “A circle is a way to deal with very odd relationships,” says Mindel. “It’s a trick they used a lot in the Baroque.” With an entrance foyer, a long, well-lit gallery ideal for hanging art from the couple’s collection, a library that also functions as a television room, and two smaller bedrooms tucked away from the master, the residence conjures many of the features of a classic Park Avenue apartment. “It alludes to a formal way of living in a completely informal way,” Mindel says. Surprisingly, it also gives its owners an even more intimate awareness of the outdoors than they enjoy back in California. “You have a real sense that you are on an island,” the wife says. “Each season, there’s a different palette. In winter, there are sometimes chunks of ice floating in the river. It’s very serene, and yet it’s a very powerful interaction with nature.” The family stays in the apartment during short trips of two to three days; the couple attend business and board meetings, then join the children for shopping forays and theater outings. “One of the first nights we were here, we all went out onto the green turf field of Hudson River Park with a soccer ball,” the wife says. “We can entertain, and we can have our kids doing homework at the kitchen counter. It’s so flexible.” In the open dining area, a laminated-walnut table by Martin Szekely can be combined with two smaller counterparts to reach banquet proportions—as it did for a recent Thanksgiving dinner. On more intimate occasions, a small Ettore Sottsass table in the living room seats four. 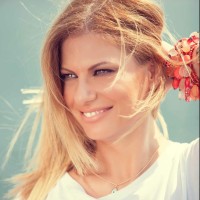